Waiting on Wednesday is a weekly meme hosted by Breaking the Spine that spotlights highly anticipated upcoming releases. Normally, when I post my Waiting on Wednesday pick, I select only one book to feature. However, I have some pretty incredible ARCs in my reading list right now, and I thought that this week I would change things up and give you a little preview of some of the books I will be reviewing in the near future. Keep your eyes on these six books which are sure to be a hit when they reach the shelves!

Summary (via Goodreads)
I am Henrietta Howel. The first female sorcerer. The prophesied one. Or am I?

Henrietta Howel can burst into flames. When she’s brought to London to train with Her Majesty’s sorcerers, she meets her fellow sorcerer trainees, young men eager to test her powers and her heart. One will challenge her. One will fight for her. One will betray her. As Henrietta discovers the secrets hiding behind the glamour of sorcerer life, she begins to doubt that she’s the true prophesied one. With battle looming, how much will she risk to save the city—and the one she loves?

Why I’m Waiting:
I’m currently reading this ARC, and I am about to hit the halfway point. Let me tell you this – I cannot WAIT to rave about this book! I’m completely enraptured by the protagonist, Henrietta, who is essentially a Victorian lady human torch! I know it’s going to be a series, and I’m already dreading the wait for a sequel.

Summary (via Goodreads)
Every generation on the island of Fennbirn, a set of triplets is born: three queens, all equal heirs to the crown and each possessor of a coveted magic. Mirabella is a fierce elemental, able to spark hungry flames or vicious storms at the snap of her fingers. Katharine is a poisoner, one who can ingest the deadliest poisons without so much as a stomachache. Arsinoe, a naturalist, is said to have the ability to bloom the reddest rose and control the fiercest of lions.

But becoming the Queen Crowned isn’t solely a matter of royal birth. Each sister has to fight for it. And it’s not just a game of win or lose…it’s life or death. The night the sisters turn sixteen, the battle begins. The last queen standing gets the crown.

If only it was that simple. Katharine is unable to tolerate the weakest poison, and Arsinoe, no matter how hard she tries, can’t make even a weed grow. The two queens have been shamefully faking their powers, taking care to keep each other, the island, and their powerful sister Mirabella none the wiser. But with alliances being formed, betrayals taking shape, and ruthless revenge haunting the queens’ every move, one thing is certain: the last queen standing might not be the strongest…but she may be the darkest.

Why I’m Waiting:
This is definitely next up on my reading list. Between A Shadow Bright and Burning and Three Dark Crowns, September 20th is shaping up to be a great day for book releases. I love the idea that all three sisters seem to be untrustworthy, and I can’t wait to see who will reign victorious. 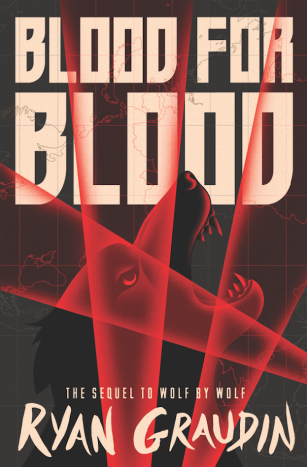 For the resistance in 1950s Germany, the war may be over, but the fight has just begun.

Death camp survivor Yael, who has the power to skinshift, is on the run: the world has just seen her shoot and kill Hitler. But the truth of what happened is far more complicated, and its consequences are deadly. Yael and her unlikely comrades dive into enemy territory to try to turn the tide against the New Order, and there is no alternative but to see their mission through to the end, whatever the cost.

But dark secrets reveal dark truths, and one question hangs over them all: how far can you go for the ones you love?

Why I’m Waiting:
I read and reviewed the first book in this series, Wolf by Wolf, last year, and I loved it. It actually made me really enjoy historical fiction, and I’ve been eagerly waiting to find out what happens to Yael next after her mission took an unexpected turn.

Summary (via Goodreads)
In a world where disease has been eliminated, the only way to die is to be randomly killed (“gleaned”) by professional reapers (“scythes”). Citra and Rowan are teenagers who have been selected to be scythe’s apprentices, and—despite wanting nothing to do with the vocation—they must learn the art of killing and come to understand the necessity of what they do.

Only one of them will be chosen as a scythe’s apprentice. And when it becomes clear that the winning apprentice’s first task will be to glean the loser, Citra and Rowan are pitted against one another in a fight for their lives.

Why I’m Waiting:
I adored Shusterman’s Unwind series. He always has unique plots with plenty of unexpected twists, so I’m really looking forward to an early look at this new series.

WE KNOW IT WAS YOU
By Maggie Thrash
Release Date: October 4, 2016

It’s better to know the truth. At least sometimes.

Eight days later, Benny Flax and Virginia Leeds will be the only ones who know why.

Why I’m Waiting:
This one is a bit of a wild card for me. I’m not familiar with the author, and I requested this ARC on a whim. Something about the description just has me hooked, and I think it’s going to make for a chilling fall read.

Summary (via Goodreads)
When Tea accidentally resurrects her brother from the dead, she learns she is different from the other witches in her family. Her gift for necromancy means that she’s a bone witch, a title that makes her feared and ostracized by her community. But Tea finds solace and guidance with an older, wiser bone witch, who takes Tea and her brother to another land for training.

In her new home, Tea puts all her energy into becoming an asha — one who can wield elemental magic. But dark forces are approaching quickly, and in the face of danger, Tea will have to overcome her obstacles…and make a powerful choice.

Why I’m Waiting:
I know I’ve said it before, but if you have a character that’s a witch, it’s almost a guarantee that I’m going to want to read the book. This one doesn’t come out till next year, but I’ve heard quite a bit of advance praise.

So there you have it, six incredible reads to look forward to! Which one intrigues you the most?

One thought on “My Waiting on Wednesday Reading List”