We’ve almost reached the end of 2016, a rough year in general for most everyone. I don’t know about you, but by the time the holidays roll around, I usually don’t have much time to just sit, relax, and read, especially this year. Sometimes, you just have to take a break from the holiday stressors and indulge in something light. For me, that means binge-reading graphic novels in my pajamas on the weekend.

I was recently approved for my first ARC of a graphic novel but since the publisher has put an embargo out on reviews until release day, you’ll just have to wait for that review! Spoiler alert – I’m really excited about it! So since I can’t tell you about that graphic just yet, I’ve decided to tell you about three others that I spent a cozy morning marathon reading. 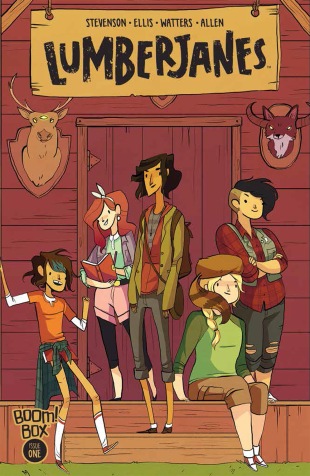 Summary (via Goodreads)
At Miss Qiunzilla Thiskwin Penniquiqul Thistle Crumpet’s camp for hard-core lady-types, things are not what they seem. Three-eyed foxes. Secret caves. Anagrams. Luckily, Jo, April, Mal, Molly, and Ripley are five rad, butt-kicking best pals determined to have an awesome summer together… And they’re not gonna let a magical quest or an array of supernatural critters get in their way! The mystery keeps getting bigger, and it all begins here.

I’ll keep it short and sweet since we’re trying to get through three reviews here… Lumberjanes is a great, light, funny read. You’ve got a group of girls seeking action and adventure while at this camp, and what they find is all sorts of supernatural weirdness. There’s an educational element (the girls solve anagrams, work out the Fibonacci sequence, etc.), but also lots of hilarity and funny references (the one that got me was April saying, “I could teach you, but I’d have to charge”….which immediately had me sending a picture of the panel to my BFF that I always share  “Milkshake” by Kelis jokes with). While the art in this graphic was more cartoon-y than what I normally prefer, I was more impressed with the fact that the cast of characters are representative of all body types, skin colors, and sexualities. It’s a really empowering read for young females, and I highly recommend it! 4.5/5

Add Lumberjanes to your To Be Read Shelf on Goodreads 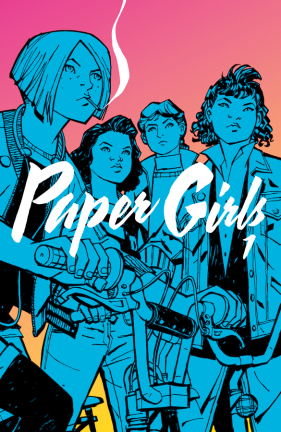 Summary (via Goodreads)
In the early hours after Halloween of 1988, four 12-year-old newspaper delivery girls uncover the most important story of all time. Suburban drama and otherworldly mysteries collide in this smash-hit series about nostalgia, first jobs, and the last days of childhood.

Paper Girls has A LOT going on. Sometimes that works to its advantage, sometimes it doesn’t. The artwork is phenomenal, and the premise is ripe with 80’s references, time travel, and strange monsters – oh my! The characters, however, left a lot to be desired. Out of the group, I can only really remember Mac’s name because there wasn’t a whole lot about them that stood out as memorable. I kept waiting for more backstory, more interesting dialogue, and a better grasp of what exactly is going on. I will probably give it another chance and try out the second volume to see if it delivers what I’m looking for, but right now my rating is standing at 3.5/5.

Add Paper Girls to your To Be Read Shelf on Goodreads 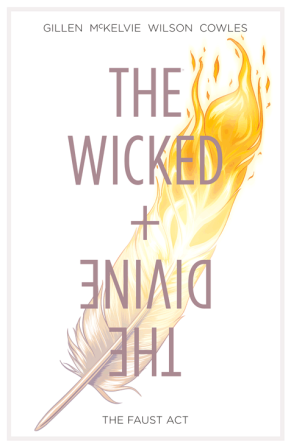 The Wicked  + The Divine: The Faust Act
By Kieron Gillen and Jamie McKelvie

Every ninety years, twelve gods incarnate as humans. They are loved. They are hated. In two years, they are dead. The team behind critical tongue-attractors like Young Avengers and PHONOGRAM reunite to create a world where gods are the ultimate pop stars and pop stars are the ultimate gods. But remember: just because you’re immortal, doesn’t mean you’re going to live forever.

Oh my gods… THIS BOOK. Instantly addictive. You won’t want to put it down, and if you’re like me, the moment you finish, you’ll immediately have to find the next one. Lucky for me, our library just recently went live with Hoopla (a free streaming service for movies, tv, ebooks, audio, and graphic novels!), and it happens to have every available issue of The Wicked + The Divine. THIS is the kind of graphic novel I’ve been looking for. Beautiful, stunning artwork. Fascinating characters. And a story line that will keep you hooked. It kept me guessing the whole way through, and it actually makes it difficult to pick a favorite character because they’re all so captivating (ok, ok…I pick Luci. Who can resist that charisma?) The mixed mythologies are a nice touch, and I can say with certainty that the rest of the series so far is just as good as the first. I can’t praise it enough. 5/5

So, now that I’ve discovered the endless possibilities on Hoopla (as well as the fact that Hoopla has the rest of each of these series at my fingertips for free), you likely won’t see me around the interwebs for the rest of this year. I’ll be too busy hibernating in my blanket cave, reading as much as possible before spring…well, at least before the spring semester starts.

I’ll see you all in January with a review of a highly anticipated retelling, as well as a ‘hauntingly’ cool giveaway!