It’s been awhile, hasn’t it? Although my reading list has stayed consistently full, Among the Authors has been on a bit of a hiatus while I finish up with grad school (the end is in sight! Come on, May!). However, an enticing email from Entangled Teen recently popped up in my inbox and promised a dark carnival story full of mystery and mayhem. Even with a growing to-do list (major life update since my last post: I’m engaged and getting married this year!), I couldn’t resist the call of the carnival. You all know how much I loved Caraval, and while I went into this thinking that By a Charm and a Curse would be similar, I found it to be nothing like Caraval, yet still a uniquely fun read.

I received an eARC from Entangled Teen in exchange for an honest review. 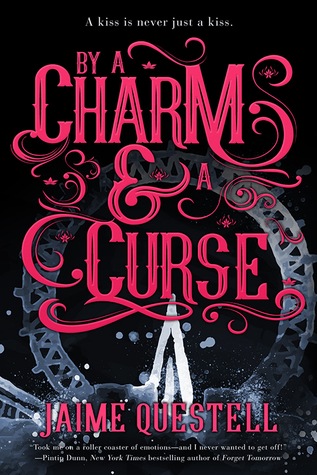 Le Grand’s Carnival Fantastic isn’t like other traveling circuses. It’s bound by a charm, held together by a centuries-old curse, that protects its members from ever growing older or getting hurt. Emmaline King is drawn to the circus like a moth to a flame…and unwittingly recruited into its folds by a mysterious teen boy whose kiss is as cold as ice.

Forced to travel through Texas as the new Girl in the Box, Emmaline is completely trapped. Breaking the curse seems like her only chance at freedom, but with no curse, there’s no charm, either—dooming everyone who calls the Carnival Fantastic home. Including the boy she’s afraid she’s falling for.

Everything—including his life—could end with just one kiss.

By a Charm and a Curse is a very, VERY quick read. I picked it up and didn’t sit it back down until I was finished, only a couple of hours later. The 300 pages seemed more like half that. It’s a great book for an after-work-wind-down, when you really need something light and easy to escape the stress of the day. What better way to do that than by visiting a mysterious carnival?

The setting is a major strength to this book. It is well-written, and even though the closest thing I had to a carnival growing up was the county fair, I could clearly imagine this whimsical, enchanting circus. Speaking of circus, you might see this book compared to The Night Circus as well as Carnaval, but let me reiterate that all of these books have very different stories. They merely share a similar setting. The setting is vibrant and makes an interesting playing field for a diverse cast of performers.

Telling the story in dual points of view between the two main characters, Emma and Benjamin, was a wise choice on the part of the author. Emma was an interesting enough character, and I thought her struggles with the marionette-like transformation were uniquely creepy. Between the two of them though, I found myself looking forward to the chapters told from Benjamin’s perspective because I feel like he had a bit more depth. However, Sidney, the former Boy in the Box, easily stole the show for me. He was fun, engaging, and I wanted so much more from his character. Had the book been a little bit longer, that might have been possible.

There’s not much that’s surprising about By a Charm and a Curse. I think you’re meant to be shocked by the true nature of the curse, but most readers will see it coming from very early in the story. I actually was surprised by a dark and deadly moment towards the end, but unfortunately, I feel that it was unnecessary and didn’t really do anything to further the plot. While the story can get predictable, there are other parts that get rather confusing, like how certain characters don’t react to things the way people normally would or they don’t ask questions that should have been obvious.

To be completely honest, after the first few pages, I was a little concerned that this was not the book that I expected it to be and that I was going to completely dislike Emma. She complains a lot about having to stay with her dad and brothers while her mother is out of the country. She’s stuck in this place that is just soooo awful and the only thing her one friend in town wants to talk about is setting her up with boys. Then, she meets a complete stranger who, after only a few moments, Emma believes completely gets her, and all she wants to do is hold hands with him and maybe kiss him (her first kiss! *gag*). It’s all a little bit eyeroll-inducing. But stick with it! I promise the story does get better from here, although even the real romance portion of the book does feel pretty rushed and without any real conflict (other than an overprotective mother).

I’d give By a Charm and a Curse a solid three stars. This book is a fun escape, and one that can be easily read in one afternoon or evening. The premise is intriguing and the setting full of whimsy. The cast of characters, while sometimes lacking in depth, are memorable and add to the mystery of the carnival itself. Although it will leave you wishing it was a little longer, it’s a fairly impressive debut for Jaime Questell, and it makes me look forward to the possibilities of what she may write in the future.